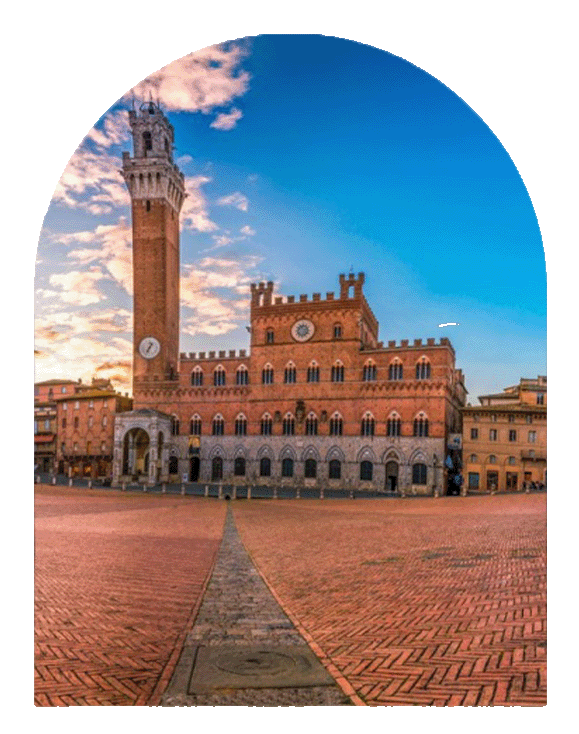 Siena, known as gothic dream, still perfectly represents a medieval town and that is the reason why, in 1995, it became a Unesco World Heritage site.
The recognition came because of the urban and architectural characteristics of the historical centre of Siena, its buildings, churches, monuments and urban areas.
On top of all that, Siena hosts the most unique horse race in the world, known as “Palio di Siena”, that still follows its medieval traditions and rules.
The horse race takes place in Piazza del Campo, the central shell shaped square. 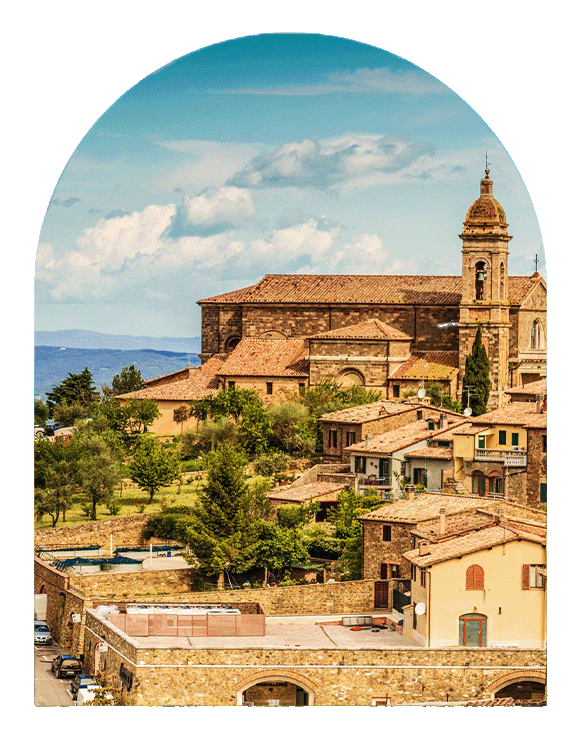 At south of Siena there is a medieval town that is surrounded by walls and dominated by an antique castle characterized by a perfect architecture. Montalcino, at west of Pienza, is a beautiful historical town that is situated in the amazing Val D’Orcia’s Natural park and it is rinowned worldwide for the production of the Brunello di Montalcino. The village is left as it was around the XVI century. Once you reach the top where Montalcino lies, an amazing view opens up in front of your eyes: a sequence of hills dotted with yellow and red flowers, ancient oak tree, olive trees, countryside roads that go through vineyards and cypresses here and there.

GROSSETO and the seaside 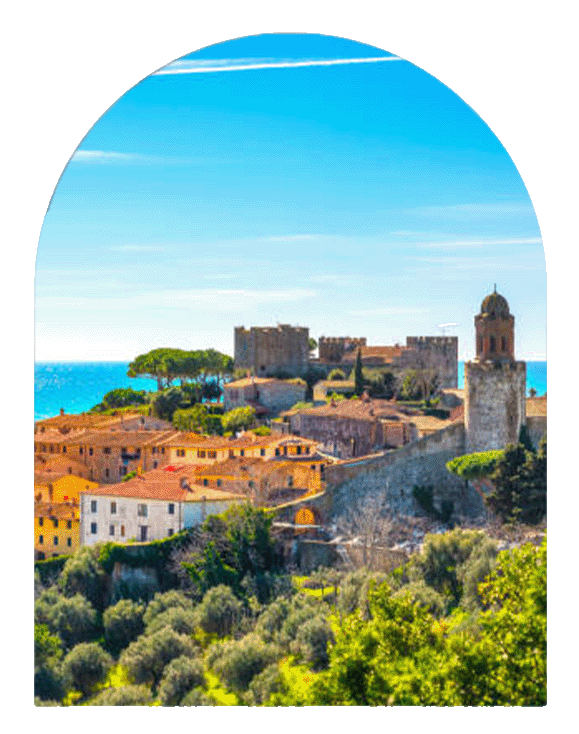 Grosseto is the main town of Maremma and it develops on the valley that is crossed over by the Ombrone river, near the seaside. The development of the city is more recent compared to the other medieval towns in Maremma. We could identify its establishment in 935, when Roselle was completely destroyed by Saracen pirates.
Make sure to visit the city centre of Grosseto, but explore also the nice beaches, like Punta Ala and Castiglione della Pescaia.
An other picturesque place to visit in the area is Giglio island, with its natural park and unspoiled beaches.
Iconic and charming is also the Uccellina natural park, green heart of Maremma. 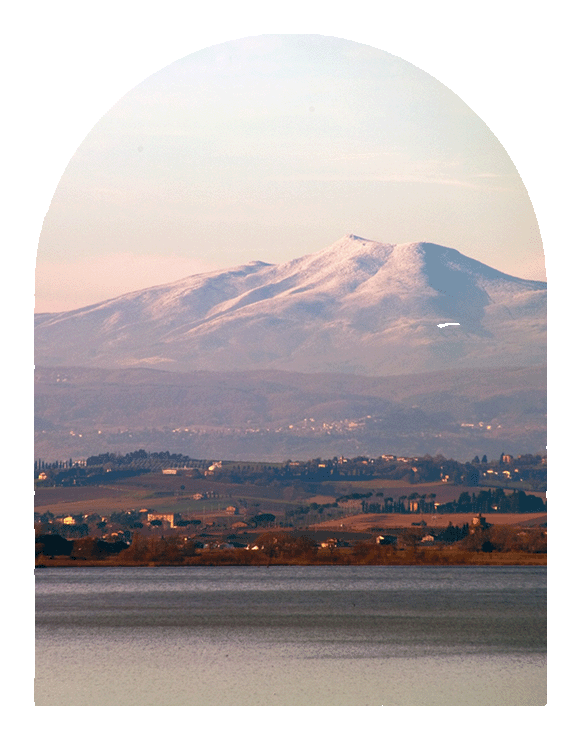 Amiata Mountain in Tuscany with its height of 1738 meters, dominates Val d’Orcia and Maremma and separates the two provinces of Siena and Grosseto.
The mountain is covered with vegetation up to the top.
For the tourist and its residents, it offers picturesque views and landscapes. In winter it becomes a ski resort with 12 slopes and 8 ski lifts. In summer, instead, it is destination to many who wants to enjoy some fresh air, look for mushrooms, do trekking, horse riding and cycling 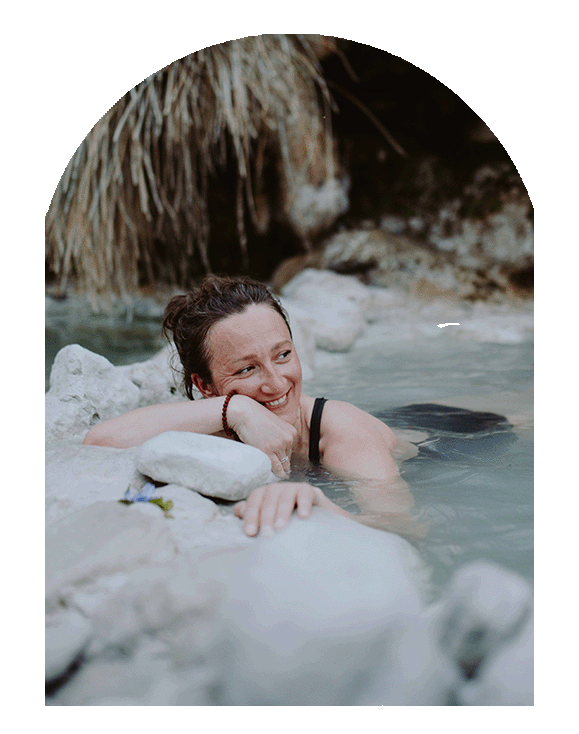 Between Grosseto and Siena, you will find Petriolo, that is the one of the most important locations for hot springs in Tuscany.
Surrounded by hills and a natural environment, the hot springs are immersed in the Basso Merse’s natural reserve, in a wonderful forest scenery, that allows you to recharge and find yourself.
They benefit of a unique location where peace and silence take you to a completely different atmosphere.
You could benefit from the therapeutic hot springs: these baths are great for your health. The thermal water has a temperature of +43°, and comes from the Farma stream. 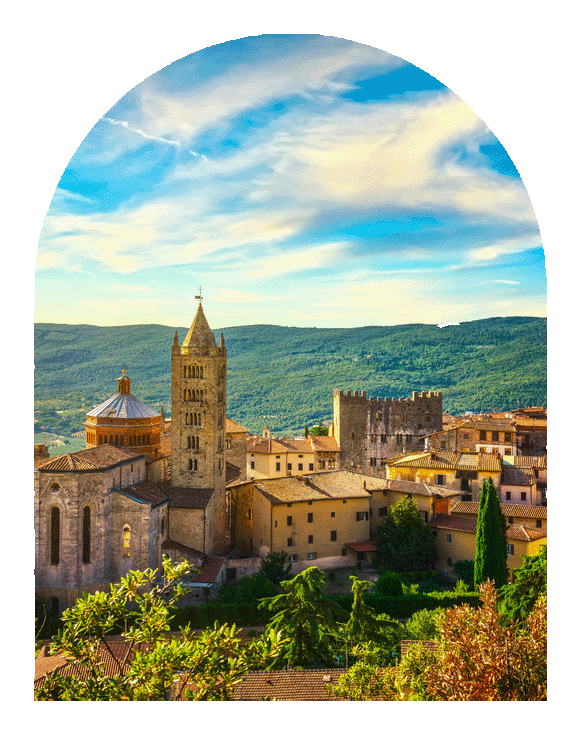 The territory, excluding the summits of Poggio di Montieri, Cornate di Gerfalco and Carline di Travale, that all exceed 1000 meters, is mainly hilly. The soil is extremely rich of different mineral resources and locally, between Pisa and Grosseto province, there are sources of geothermal energy that occurs in form of geysers. Several streams and rivers flow from the metalliferous hills: among them, the most important are the Cecina, Cornia and Merse. At the heart of these suggestive hills, rises Massa Marittima, pride for architecture and environmental quality. 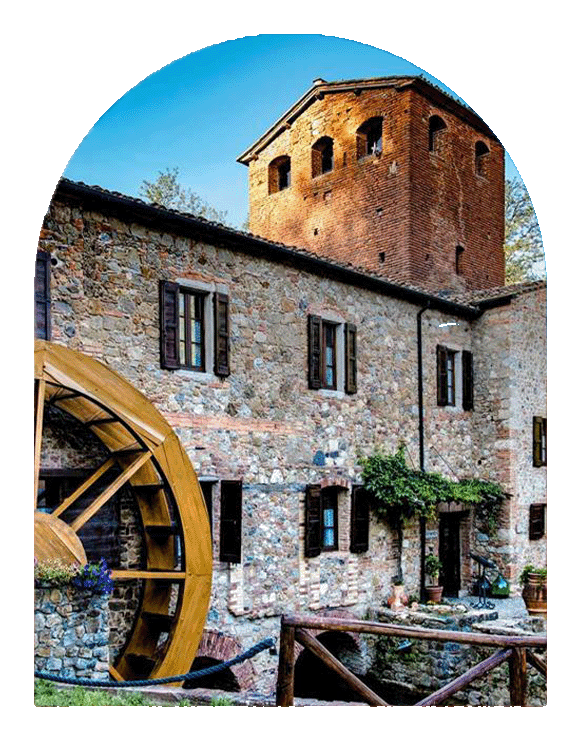 Near by Chiusdino, not too far from San Galgano abbey, there is a still-working ancient watermill surrounded by Tuscan countryside, that recently was converted into a country house. The Mulino delle Pile was made by monks from Abbazia di Serena in 1200, with the purpose to mill the wheat and to clean the clothes. 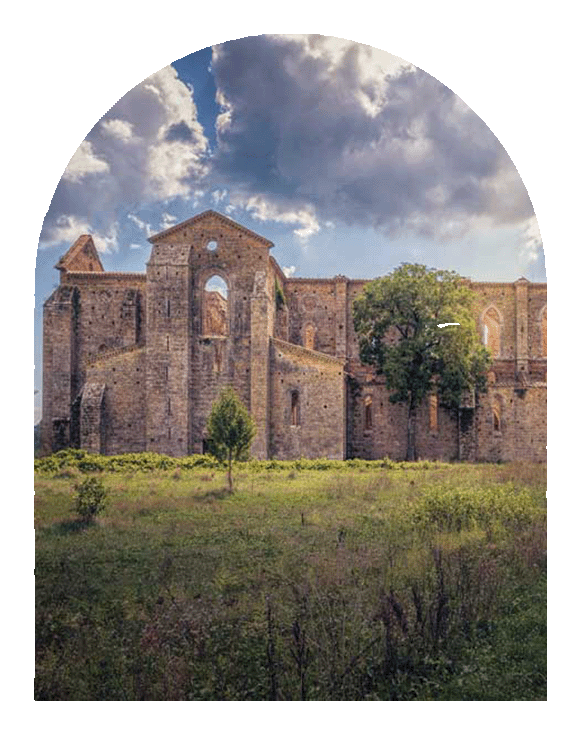 In Siena province, a little bit more of 30 kilometers at South-west of the city, on the road to Massa Marittima but far from the most important transport routes, on one of the summit of Metalliferous hills, rises the Chiusdino territory. This area is affected by a process of early anthropization, which became constant and grew especially since the medieval area. 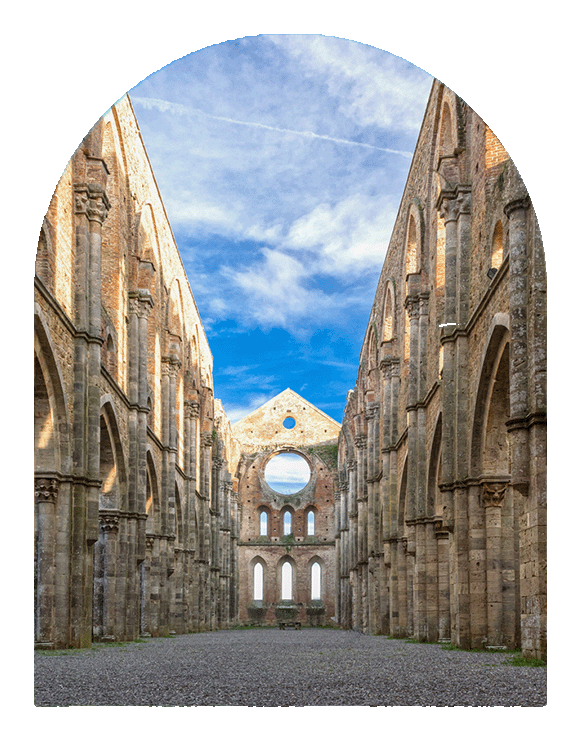 The San Galgano abbey is cistercian and is located around 30 kilometers from Siena and 3 kilometers from Mulino delle Pile, at Chiusdino town. About San Galgano, owner of the abbey of which the name day is celebrated on December 3rd, we know that died in 1181 and, converted himself to be a monk after a tough childhood, he retired to eremitic life to give himself to penance, with the same intensity with which he had first given himself to debauchery. The culminating moment of the conversion took place on Christmas Day 1180, when Galgano, arrived on Montesiepi hill, put his sword in the ground in order to transform the weapon into a cross; in fact in the Rotonda there is a boulder from whose cracks sprout a hilt and a segment of a sword corroded by rust over the years, but now protected by a plexiglas case. The echo of the Arthurian myth has not failed to raise curiosity and some assumption on possible connection between the mythology of the Round Table and the history of San Galgano. The chapel of San Galgano in Montesiepi is a sacred building 300 meters away from the abbey. There is preserved the sword that, according to tradition, Galgano Guidotti would have stuck in the rock as a sign of giving up the social life.
BOOK NOW